When I suggested to Feral we meet up at the Pine River yesterday he said let’s meet at the bridge-out. I suspected he meant six-mile bridge but it has been so long since they put in the bridge I thought maybe he had another spot in mind like a washed away landowner bridge or something. No, “bridge out” is six mile bridge. We met there but drove to a more remote spot that tests a vehicle suspension and paint finish. The rut and rock strewn two-track narrows down to nothing with side-scraping branches before opening into a small clearing. I have never seen anyone else park there. As a bonus, it is a short walk to the stream and an easy walk back when you are done fishing.

The morning fog was still hanging over the stream.  I gestured for Feral to take the lead, a bad habit I picked up over the years. He was throwing a silver minnow, a yozuri, which was small but has nice action.  I lost a gold Rapala almost immediately on a sunken branch too deep to retrieve.  While I was retying Feral feral caught and released a small brown trout then moved up and had a larger one make several passes. It didn’t want his yozuri but took my small silver Rapala.  Things picked up from here. I won’t go into details but we were passing my net back and forth as we caught good trout. I had hoped for two dinner trout and Feral was thinking the same. Here are the two I kept. I just finished field dressing the larger one and was ready to add it to the stringer. 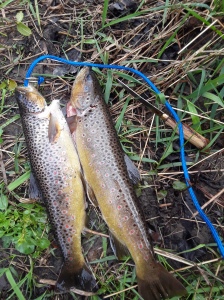 So we went back and forth taking the lead. Feral ended up with two browns of similar size. We hung the stringers on a tree while getting out of the waders. Doesn’t make a good photo but you can see four nice trout. Note: if you click on the photo it will upload larger, use your browser back button to return to the post. 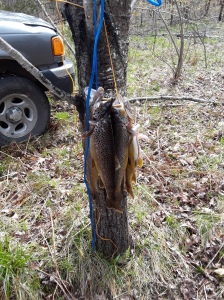 From there we headed to our Morel mushroom area which turned out to be a failed attempt. We were certain the conditions were right but with the early spring and back and forth cold weather I can’t say if we missed them entirely or if they are going to be sprouting like dandelions in a day or two. I’ll have to wait for a report from Feral who doesn’t have such a long drive.

Feral at our Morel Spot