A Trout too Far 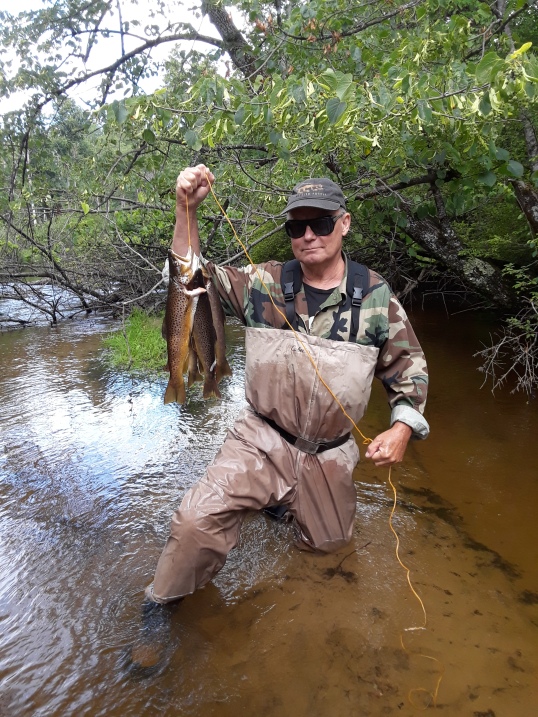 Feral with a respectable stringer

I posted this a month ago but took it down the next day. Hard to explain why other than the story left me spooked. It is an honest post. And maybe a lesson.

I called up Feral this week ( early August) to see if he wanted to go trout fishing and mentioned keeping a couple for dinner. He groaned when he heard that. That’s a sure way to jinx a trout trip. But he was game so we headed up to the Pine on an overcast morning. Feral had left all of his trout lures up at his second home so when we reached the river I opened my two small totes of lures and told him to pick out whatever he liked. He picked an old standby that I had used earlier this year and did well with, a small floating minnow. I picked a similar but larger lure and we fished for about an hour with Feral catching one keeper. The fishing was slow and the wading tough so I opted to head back to the car for a break and to rethink the fishing. We decided to try another stream and when we arrived there we had a beer and sandwich on a high bluff overlooking the stream. We took a path downstream and got in at a bend and right away Feral started catching trout. He was placing the lure into tight spots up under overhangs and dropping it right next to the bank. I can’t remember him casting so darn good and the lure could have been made for that stream because his precision casts were rewarded again and again. It was so fun watching that I was content to follow, though I did take the lead here and there. My larger lure had a couple follows but nowhere near the constant action of Feral’s smaller floating minnow.

So this is where it gets interesting. We had enough trout for our dinners. Feral was dragging a good stringer which divided nicely. Then he caught a trout about sixteen inches and standing there watching him hold the trout I asked if he was going to release that one.. we had plenty. The gears were grinding and finally he said he was going to keep it. There was no reason he couldn’t. He could always keep it for a second meal or freeze it. But in my mind it was one fish too many. He cleaned the fish and added it to the stringer. I took the lead but we were both thinking we would call it quits soon and there was a logical get out spot up around a bend or two. We came to an interesting piece of trout cover on our left that was divided into three separate castable areas and I managed to see a flash in the first area but didn’t catch him. I moved up to the second castable spot and Feral moved up to the first. From my vantage point I could see down into the water where he was casting. Suddenly he had a fish on and it broke off the lure, the lure that was responsible for catching our dinners. He apologized for losing the lure but frankly I was going to give it too him anyway, for providing the entertainment and dinner. No problem. I gave him a second lure and he made the same cast with me looking right down into the water where he cast. I saw a flash which in my mind was a rainbow trout, silvery and more rounded shape than the brown trout we were catching. Feral made the exact same cast and this time the fish was on but did managed to get off. Feral said it was a pike. He saw it close up before it threw the lure. No doubt, a pike. That of course would explain how the first lure was lost. Pike have sharp teeth known for cutting fishing line. The pike never felt the hooks on the first lure and cut the line. So he was not shy about chasing a second lure.

We headed back to the car shortly after that. On the way Feral commented on how Jake Lucas, our mentor, would have been proud of us heading to the river and bringing home supper. But in my slightly off center universe I was thinking about the large trout on the stringer. Did keeping that trout set off a chain of events leading to a lost lure to a northern pike on a trout stream? What was the pike doing there? I had never heard of or seen a pike on that stream. If Feral had tossed back the big trout earlier, a trout to far, how else might have the fishing played out? Was there a lesson?

I tried fishing my remote nameless creek twice this year but both times it was flooded and over the banks with the water opaque like a milkshake. I fished fifty yards each time and left because the fish could not see my lure and I couldn’t see the log structure. Yesterday I put new line on my reel, ice in my cooler, and headed there again hoping to finally find it fishable. I stopped where the creek crosses under a gravel road in big tubes to get a look and it didn’t look good: super low water level and very clear. I debated heading north to the Pine River but it was already mid-afternoon so I put on my waders and walked downstream.
When I reached my normal entry spot I was thankful I put new line on the reel – it makes it much easier to cast right next to the bank or under branches and into tight dark areas. I knew the shallow water was going to be a challenge but to my amazement the trout were hungry and very aggressive. A sort cast in front of a messy blowdown brought the trout below out into the open into sandy shallows where it grabbed the lure and put up a good scrap. It was a shade over twenty inches. I let him go. I like to keep smaller trout for dinner.

I fished for about an hour and a half and caught four good dinner trout. I also tossed two back and one broke off a brand new lure – so it was a pretty remarkable day. Trout dinner for Memorial Day!

I wasn’t sure what to expect up at Silver Lake, Mears, Michigan because rumor had it that local efforts to control the exploding weed growth were working – which had an adverse effect on the fishing. Silver Lake is a swimming and recreation lake first, fishing takes a back seat because most homeowners want sand, not weeds. I didn’t bother bringing a fishing pole on a family visit to see Bill and Karen DeJong who have a beautiful home opposite the dunes.

It turns out Bill was up for a challenge. We had access to a nice deep-V fishing boat and motor so we rose early and headed to the one spot in the lake that had reed beds thinking it might provide some bass structure. I was skeptical, Bill was focused. We had a strong wind out of the east, not good, so we anchored just outside of the reeds and went to work. Bill bought some crawlers and tried those with bobbers and/or just tossed them overboard with sinkers while I poured through his tub of artificial baits. I would like to say my finesse with plastic worms payed off but instead watched Bill find a workable pattern, bobbers with half-crawlers, just inside the reeds. He took three nice bass inside an area of about six square feet. It was surreal.

This was humbling. About the time we were ready to leave he took one of his poles and handed it to me – hoping I might catch something. A second later the bobber went down and I pulled in a bass that might have gone five inches. That is stretching it.