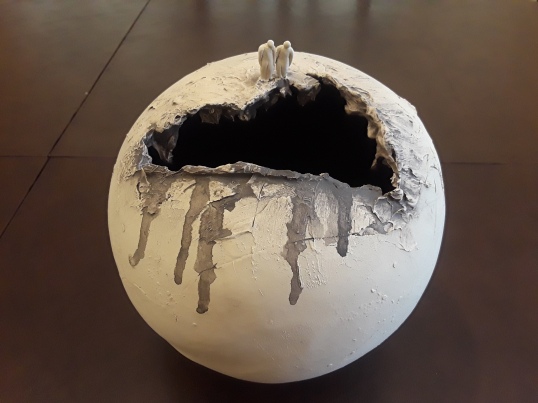 I know, not trout fishing, but I thought a few readers might be interested in the strange piece of art I picked up last week. It’s about the size of a volleyball and hollow. I have been trying to research the artist online, Meg Scott, hoping for some information. I found two other examples of the artists work: A vase with a raised flower with the exact same signature. A second piece, a blue ceramic plate with a raised orchid with no signature visible but attributed to Meg Scott. Both pretty tame compared to this haunting, apocalyptic piece. I am sure my daughters will be fighting over this.. Not. 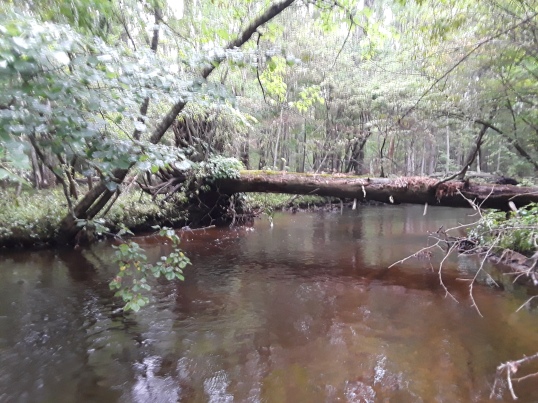 A week ago Feral called to report the Baldwin River was not just over the banks, but over the roads. They had ten inches of rain which put a real damper on the Trout-o-rama festival including blocked roads into and out of town. But that was a little over a week ago. I had the morning off so I drove up there with the idea of fishing the Baldwin if it was wadable. The weather report said possible rain and that was actually a bonus, not to raise the river more, but to get the trout actively feeding. Add rain, double your trout.

It rained but five minutes so it didn’t help. I caught one nice trout, about 17 inches, on the stretch below Bray Creek Campground. There’s a poorly marked walking trail which follows the hillside and drops down to the river in two places. I went as far downstream as I could figuring that would have the least overall fishing traffic. I would post a photo of the trout except the lens of my camera phone must have been wet so I have three fuzzy photos of a large blob surrounded by green stuff.

I didn’t see many trout. The stretch is mostly gravel and shallow. Casting the cover takes some patience and skill because the river is more like a creek, overgrown with lots of blowdowns. Still, if you can zing the lure into tight spots it can produce trout.

Feral and I have been threatening to go camping and trout fishing since the opener but this is the year where bad weather (clear skies and 90 degree temps) or various commitments keep sidetracking plans. I’m afraid to blink: the trout season closer will be upon us.