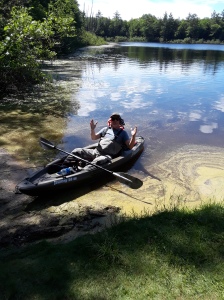 I headed up to Leverentz Lake to meet Feral early Friday afternoon in order to beat the let’s get out of town Covid sucks crowd. It paid off because the campsite was almost full. This was the first weekend State Forest campgrounds opened in Michigan due to coronavirus concerns. Feral and I took our backpack tents (instead of the Apache tent campers) which allowed us to use campsite 2 which has no driveway. Number 2 sits on a hill near the general parking area. Sounds bad but this is a rustic campground and number 2 is more remote than any of the other spots. We had some clean-up work to do. The fire pit was full of dirt, coals, melted bottles, etc. and we had to rake the general area which had downed branches and layers of leaves. It turned out well. A comfortable camp. We bought some fudgie wood and had fires two nights.

The fishing was something else. The photo shows Feral holding up all of the fish we caught. Getting a big bass or pike didn’t seem so important. Main thing was being outdoors in cool weather. Helps recharge the soul.

Feral’s son Jake joined us on Saturday night. He brought a hammock and I should have taken a photo. His sleeping bag is designed to surround the hammock to provide better warmth (rather than lying a bag on the hammock). Jake’s a bicyclist/camper taking overnight journeys in the wilds up around Alpena so he’s into actual backpack camping and making the most in minimalist mode. Good to see him, it had been a couple years.

I brought my Ventura camp guitar, a small acoustic bass, and a mandolin thinking it would be fun to get Jake doing some music. One time, remote camping up near Vanderbilt, he brought a 3/4 size upright bass to camp. There’s a photo somewhere in the archives. Jake has some music chops on both guitar and bass. He wasn’t into jamming though, said he hadn’t played in a long time. So Feral and I traded songs back and forth hoping to prove there is absolutely no reason to be shy around us. We can veer left on some classic songs and keep right on playing. It turned out to be a fun night with stories and odd songs. Plus, free food. Some folks Feral knows from Baldwin invited us over for snacks, elephant ears, and ended up handing us tin foil dinners to warm over campfire. Thanks! People were friendly and talkative throughout the campground. Everyone has been under too much pressure with covid and bad politics.  I’m not surprised the campground filled up. 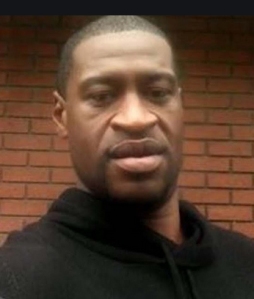 Last weekend I went camping with my buddies mainly to get away from all things Covid: the constant news, the restrictions, the hideous politics. I was aware of George Floyd’s death from the brief video showing the officer on his neck. I expected demonstrations. I returned to riots. I would like my readers to know I am appalled by what happened to George. Because we have a free press with real news I was able to learn about him as a person and then follow a time lime of his last fifteen minutes on earth. I went from thinking one of those other officers should have told that moron to get off his neck, to understanding the real horror of what happened. I thought back to gentle giants I knew in school. You remember them. Big guys that bullies would avoid. Wouldn’t hurt a flea. Then I watched the timeline. George was suspected of passing a counterfeit twenty. I wouldn’t recognize a counterfeit twenty and if I passed one it would be grounds for some questions, not an arrest. But George was guilty the minute the officers showed up. They assumed he knew he was passing counterfeit money because he was black. The videos are hard to watch. I am upset. I hope his family and the black community understand the vast majority of white America is grieving too.

Natch, Feral and I own backpack tents in case of over-nighters. No sense dragging a tent camper for a fast trip. Dispersed camping, our first shot at camping under Covid-19 restrictions, was allowed on the last weekend of May so we organized a fast trip to a remote spot on big hill overlooking the Pine River in Lake County. We had camped there before but it had been a lot of years. We cleaned up the spot with rakes, a fore-thought. It rained on Friday so I bought a couple bundles of firewood in Tustin. Natch usually brings a chainsaw but he was traveling light.

We were interested in fishing but somehow just getting together to hang loose and drink beer was more important. I bought crawlers with that in mind. We are not bait fishermen but it is a recurring theme. An excuse really, not a theme, to set up chairs along the stream, drink a six, and joke about stuff. We launch crawlers into the river with no real expectation of success. If someone catches a trout, and it has happened, it is an incentive to send someone back to camp for more beer.

Our first bait fishing spot (see 1st photo) was on a big bend a half mile downstream from camp. (Yes, we actually toted chairs, coolers, bait and poles that far through tick infested woods.) A geologist might remark on the unusual topography of the river. Opposite us, on the other side, you can see a heavily eroded sheer wall with trees roots exposed. Also a white plastic lawn chair. After a few beers that chair started taking on a life of it’s own. First as a future painting with an unabashed women sitting in it, unaware of three fishermen below. From there it turned into a movie script with ramped up suspense and Natch directing. That’s the thing about getting together with these two characters. Conversation can go anywhere and often does. 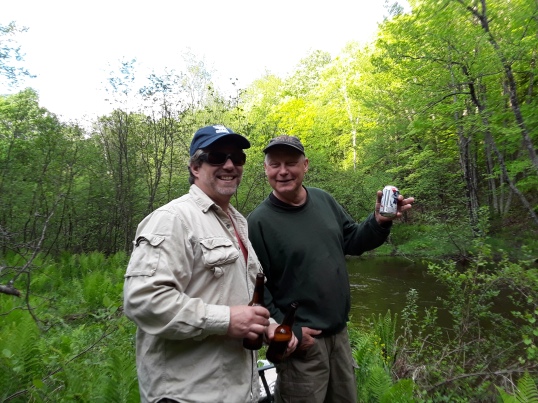 We stumbled back into camp after dark ready for a campfire and hot meal. Natch brought a store-bought forked stick hot dog holder I initially laughed at but came to appreciate quickly because the next thing I knew I was gulping down a cheese brat on a bun and not bothering with the ketchup because that was too much work. Then we had a crisis where the fire was dying and darned if Natch didn’t magically transform the fire into a perfect piece of cubism art. 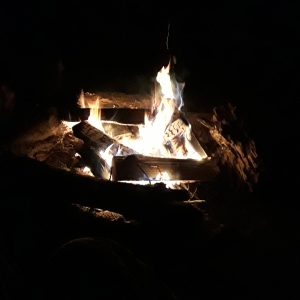 Generally speaking we accomplished everything we needed to accomplish over the weekend. Which is to say: nothing. Based on that I am tempted to call it trout camp but we’ve tentatively planned a trip in June after the State Forest campgrounds open. Might include guitars and a detour even further into the Twilight Zone.