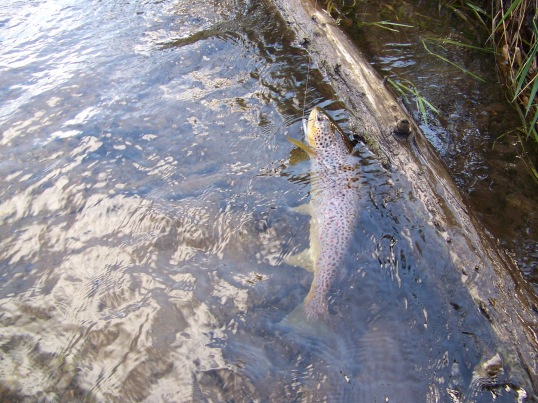 The owner of the party store/gas station in Vanderbilt asked Feral where he had been fishing on the Sturgeon and his answer was “The loggy stretch.” That was a fine example of thinking on your feet since the entire Sturgeon River in that county is log strewn. Another answer that may have worked was “the public water east of here.” The reason I am even thinking about this is I was watching a segment of Michigan Outdoors that featured some bird hunters and the host asked one of the three hunters where on earth they were. I don’t know if they blindfolded the host and camera crew on the way to their bird paradise but the hunter was clearly caught off guard. He mumbled something about not wanting to share that information. I could relate.

Feral and I have been fishing the closer up by Vanderbilt for the last dozen years and we have done our share of exploring in order to find some of the “less traffic” trout water. It helped that Mike and Denny, our most senior trout camp buddies, had a pretty good lay of the land before us so we were able to cull some information I’m sure they regret giving up. Those two have made a science of finding where to fish that includes a GPS, a Suburu Outback, and way too many bags of mixed nuts and cola. They are the Lewis and Clark of our outfit and I sometimes wonder if the exploring isn’t more fun to them than the actual fishing. Feral and I need to talk those two into an exploration of the Upper Peninsula which I understand is undeveloped.

But here is the point of this untimely post: How can you appear to share a secret location without giving away the garage? For some guys like Feral it comes natural but the rest of us need a process. So here we go.

Conversely, if you can think on your feet like Feral, pick an environment generality and act like you’ve answered the question. 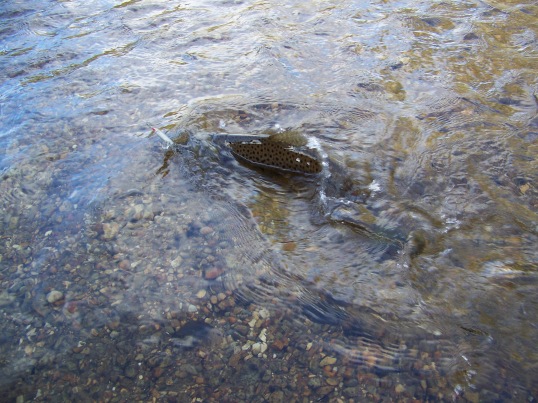 I remember a few years back fishing with Feral on the Pine and watching him catch trout after trout. I tried a variety of lures including what he was tossing but caught zip. If you were to follow either of us up a trout stream there would be very little to tell us apart. We use the same underhand flip cast to get lures next to the banks and under low hanging brush. We likely follow the same path up the stream – crossing the stream in the same places, making generally the same casts. We move about the same speed – meaning we take a similar amount of time on a bend or piece of cover before deciding to move on. We both wade quietly. We toss the same lures including a variety of minnow baits from various manufacturers as well as spinners and what not. So when one of us catches a lot of fish and the other is relegated to watch – there must be something going on.

Our roles were reversed at our fall trout camp this year. ( see 2012 Trout Camp Closer for more photos) Feral and I decided to fish a remote spot on the Pigeon we call bear country because of the difficult walk in through tangled blow downs, bogs, beaver slashings, and eye level branches designed to remove your hat or smack the guy  following. Thick stuff where you can imagine a bear rising up to say hello with a loud grunt after you step on his toe. I fished this spot alone occasionally but its nice having some company during the walk in since the conversation is two-sided and there is always the chance of running into another fisherman who may not be talking to himself.

When we reached the stream Feral let me take the lead on a wide slow bend with a grassy undercut bank.  I made two casts and watched a V- wake come back with the lure. He took it hard and I was on to a twenty incher which put up a good battle. Feral was kind enough to de-hook and release the brown trout and that set the stage for the morning.  He moved into the lead and right off a similar size fish followed his lure back but didn’t strike. He didn’t rest the fish at all, which surprised me, but continued casting and moving upstream. We each caught some smaller fish and pretty soon we came to a familiar bend which I almost didn’t recognize.

We carefully waded along the shallow outside of the bend. The inside had the faster water, a deep trough, and buried log cover and frankly it didn’t look so great mainly because the sun was up and the stream was clear. There was a little cut-in at the inside bank and I watched Feral work it with no result. I was close behind him and made almost the same cast thirty seconds later and was rewarded with a second twenty inch brown. Feral watched me make the cast, saw the lure, and saw the trout take it. If that were the first time it happened on this trip he would have shrugged it off as luck, but I had done the same thing the previous day on the Sturgeon – caught a twenty incher following behind him.

I offered to take the lead so he could catch some fish, which was funny at the time. Lesser men would complain but to Feral’s credit he asked: What are you doing different? And that must be it – I was doing something a little different because I was casting the same lure over the same water. I couldn’t explain it at the time but maybe it was the retrieve. By twitching the pole as I wound the lure back I imparted a more injured look to the minnow lure. I learned this trick bass fishing a top-water plug called a Pop-R which is the only way to fish that bait.  There’s a rhythm to it. I think Feral saw what I was doing and I don’t know if he emulated it, but at the top of the bend he caught a rainbow trout about twelve inches. 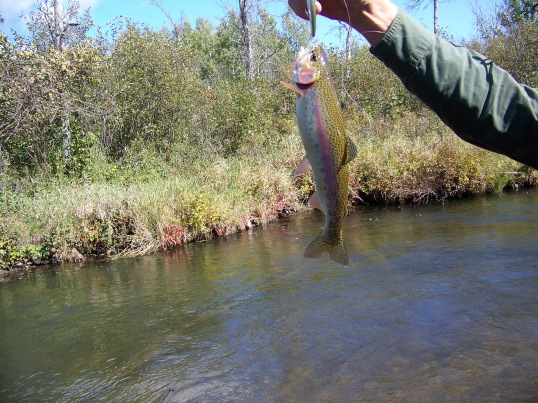 It was a beautiful fish but I know exactly how he felt because I sometimes think about that trip up the Pine where he was catching the eighteen to twenty inchers and I was lucky to catch a small keeper. Fortunately for Feral, he’ll always be able to remember this trip up the Pigeon since his fishing buddy has a blog. 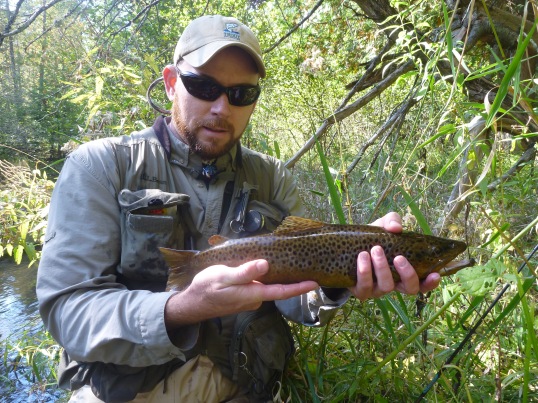 As Feral and I headed back to civilization from trout camp we passed over the Sturgeon and saw a couple fishermen on the north side of the road and both of us thought the same thing – good, looks like road fishermen wearing Cabella outfits. Not much chance they were hauling out large brown trout. (An observation born of years of experience). We pulled into the gas station/party store in Vanderbilt and cashed in a large cache of Labatts bottles and when I stepped outside I was surprised to see Feral conversing with one of the guys. They had just finished up a long stretch and did pretty well on trout and that just goes to show the value of angler profiling.

Feral mentioned fichigan in his conversation and Brett Sanders of Midland wrote to say hello and left an email so I followed up. Brett, along with Matt Hilliard, get together with a crew of devoted spin fishermen like ourselves for the closer, or “ender” as they call it. They go by the name “Dog Dialers” meaning they Dial (hook/catch) Dogs (good sized trout). They obviously know what they’re doing. Brett related their day on the Sturgeon in his email.  I’ll let Brett tell it:

“When Matt and I ran into you guys we had just gotten off of the upper Sturgeon and were heading to the West Branch. We had fished it once before, but it was quite a while ago and the water levels were a bit high. We hiked back into National Forest off of E Sturgeon Valley Rd and fished for about 4 hrs back to the road. Fish were active and decent sized. Matt landed the 17″er and shortly thereafter, I got bumped by one that size or bigger.

Then we went to the West Branch and just put in at a pull out spot just outside of Wolverine. We had similar luck in the West Branch. A decent amount of action and one bump from something 20″+. We had about 6-7 hours of fishing on the day. Totals were 4 7″-9″ each, 3 13″-15″ each, 1 17″er (Matt) and 2 missed that were or were pushing 20″. We’ll definitely be heading back up to the Sturgeon and would like to explore the Pigeon and the Black as well if you guys have any spots you’re willing to give up.”

Spots we are willing to give up? Whoa. (If they wanted to learn about some of our spots they should have pretended they were Cabella’s road fisherman). Too late now.  Here is a picture of Brett with brown trout measuring 23-1/2 (and more proof I should keep quiet about where I fish).

That said, it was great to hear from you guys!  If we run into you camping next fall maybe we can share some stories over a Labatts. 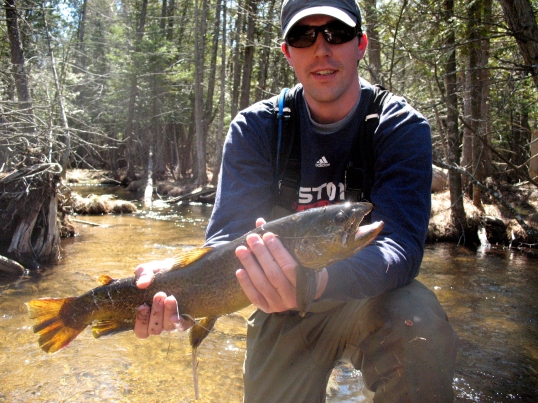 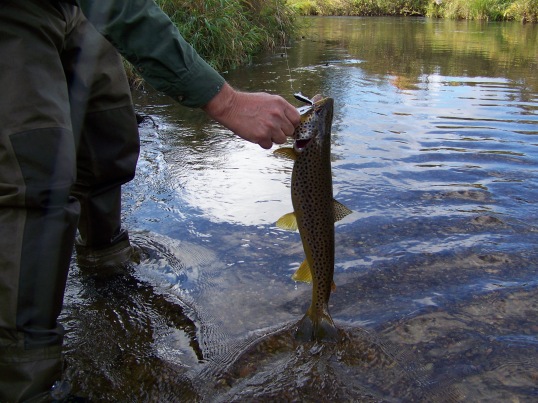 I hope to write a couple posts about this years closer,  but here are some highlights: 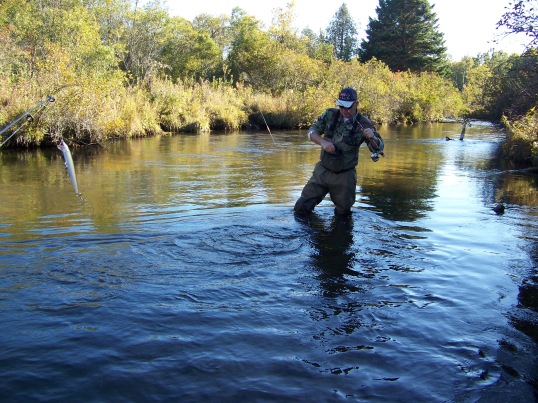 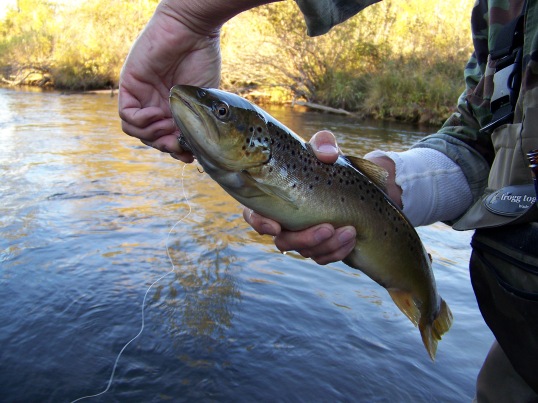 Odd angle for a photo 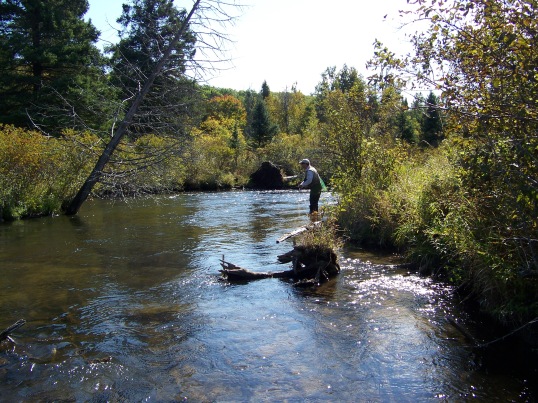 Natch working the bend at the top of the valley 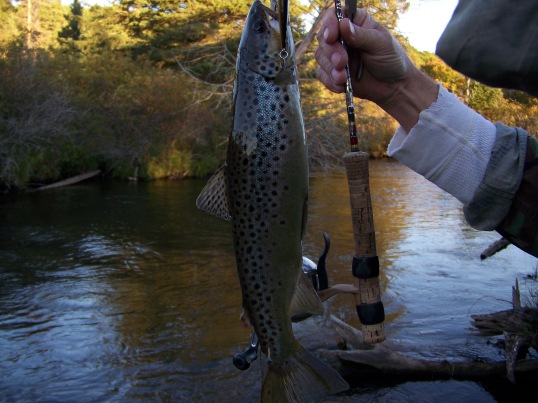 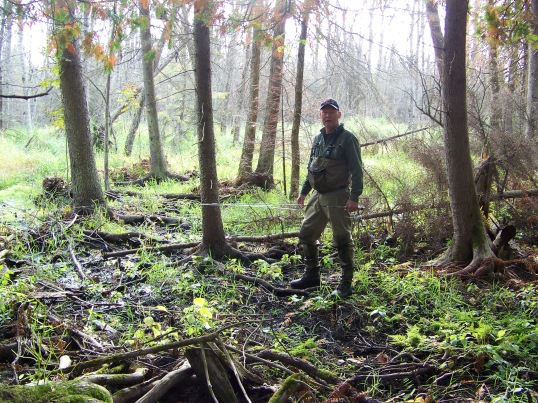 The one hour trek through bear country 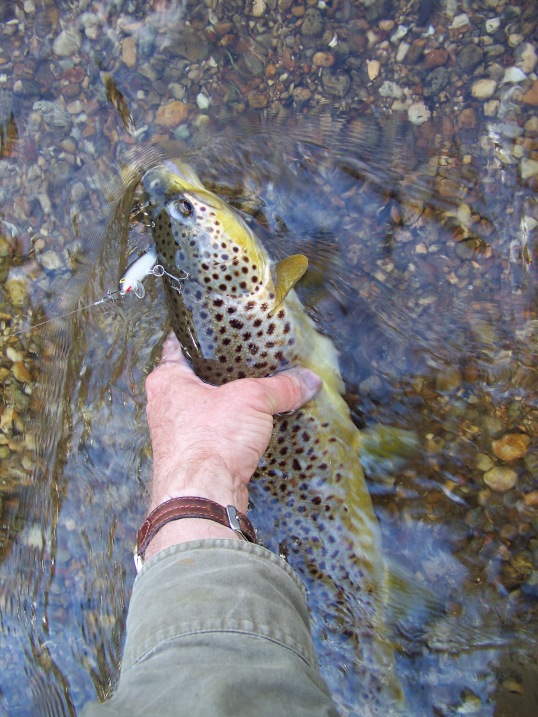 Why we make a one hour trek through bear country