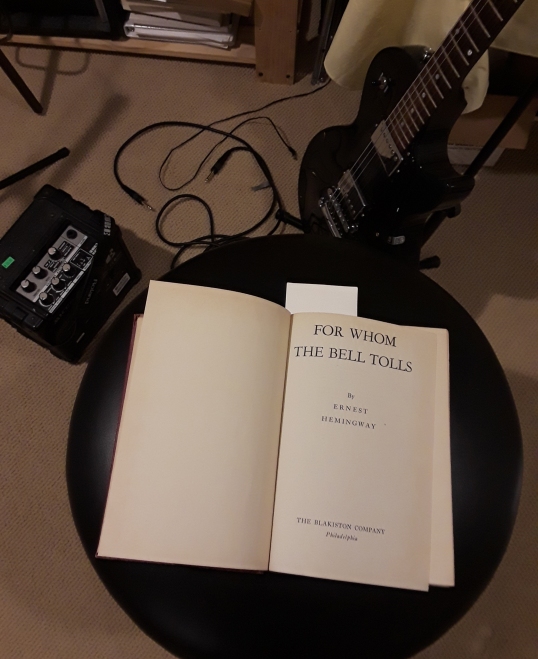 I found a first edition of For Whom the Bell Tolls by Hemingway last summer but put off reading it until now. I have read some of his short stories, in particular, the Nick Adams stories including the one about hopping off a train in the middle of nowhere and collecting black grasshoppers which had adapted to a burn over area and using them for trout fishing. And eating an onion sandwich. Hemingway is a very visual writer. I didn’t know what to expect with this novel but so far, about a third of the way through, I can say it is about as much fun as The Grapes of Wrath. Hemingway’s ability to write visually includes graphic descriptions of man’s inhumanity toward man in the fascist war in Spain that roughly coincided with WW2. The suspense may be my undoing. I am under the spell of two characters falling in love faced with the task of blowing up a bridge. The odds of success are slowly dwindling while their fate, if captured, is torture.

In November I entered a short story in a contest held by our local Library. I labored with a very long short story for about a week before deciding file that one away. The story I entered may be considered “flash” fiction. Kind of a new phenomena. One page stories. I didn’t set out to write flash fiction. It just happened. I have no idea how the story may be viewed by the judges and know that it is always hit or miss whether a story finds an audience with the right judge. But it’s fun to enter and see what happens. Results are posted in February so it’s enter and find something else to do.