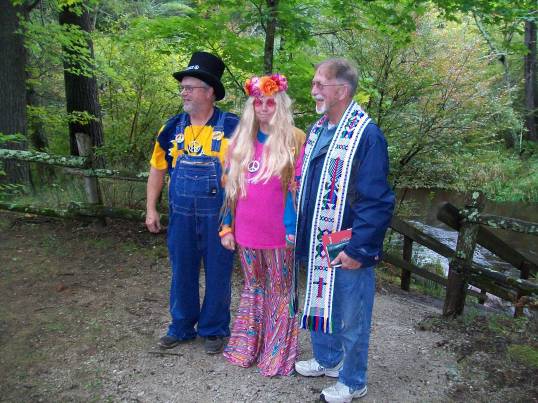 My sister Deb and her husband George renewed their wedding vows after forty years of an amazing life and marriage. They both love the outdoors and have camped throughout Michigan including this favorite spot along the Baldwin river near Bray Creek. Deb has an ongoing battle with early onset Alzheimer disease which she has fought with grace and humor in spite of the enormous challenge. George has been a pillar of strength, always at her side, refusing to let the circumstance undo their way of life and love for each other. I couldn’t be more proud of George and more amazed by both of their strength.

It was a holy marriage and renewal of vows. Father Ron Schneider presided over the ceremony which included special prayers for Deb included a laying on of hands and anointment with oils. Father Ron is soft spoken man of God with a kindness and caring that pulled everyone together, including family members who have passed on to another life, including my mom and grandparents who took us camping at Bray Creek when we were children.

The wedding had a dress theme (hippie) which provided a lot of fun and humor. The costumes were amazing and for anyone passing by it must have seemed a time warp. Father Ron wore a genuine Native American shoulder garment which was beautiful and provided some spiritual dignity. I would like to credit Father Ron for the break in weather. It was pouring rain all over Michigan. On my two hour drive to the campsite it rained all the way, stopping suddenly when I was a half mile from the campground. When I left four hours later, the rain picked up again right at the same spot. The wedding was dry. I can’t explain it. 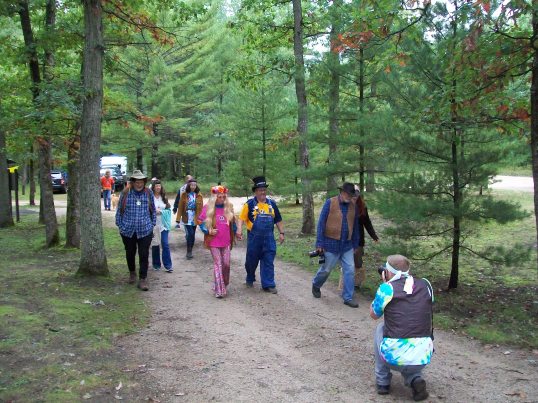 The wedding procession, Josh in the foreground

George and Deb have two boys, Josh and Dan, and it was so nice to see them and their families. Their son Josh and wife Chihiro, and daughter Mei, are truly an international family. They live in Michigan and travel to Japan every year so Mei can attend school and experience Japanese culture. Mei speaks English and Japanese and is currently studying Chinese. Josh is a famous, professional photographer. He just sold a photo to National Geographic. (Josh, please send me a group photo!) 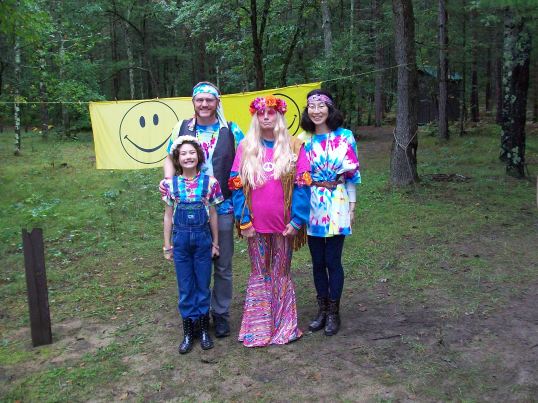 Deb with Josh, Chihiro and Mei

Dan and his wife Win are Michigan residents also. Dan is a much sought after controls engineer, and inventor, working for an international material handing company. It’s only a matter of time before Dan is recruited by another high tech company though I hope he stays in Michigan. Dan and Win’s costumes were remarkable, I swear, right out of Woodstock.

So Deb and George’s life has been blessed, and no matter what the future holds, those of us that witnessed their renewal of vows feel fortunate to have attended and acknowledge what a special life they have.