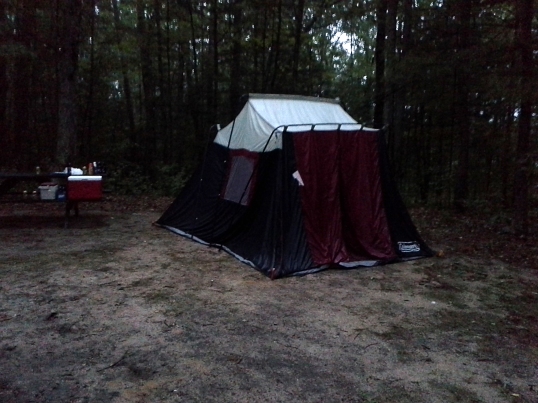 Big Leverentz campground was full except for a tiny site sandwiched between others and campsite 2 which overlooks the parking area but offers some sense of remoteness, like the corner table in a restaurant. I brought a guitar and a mandolin and when Feral and I camp there’s a pretty good chance we’ll knock down a few beers and jam. Having a remote spot is good since there’s less chance we’ll disturb other campers. Conversely, other campers sometimes stop by to listen and sometimes we get surprised by very talented musicians that want to jam.

I stopped at a garage sale earlier in the week and found a pretty nice camp cot for ten bucks. I have one already so I called Feral to see if he was interested. He was so when I packed for the trip I grabbed an old tent large enough for two cots so he could try it out. The tent is made from thin nylon material and I had a vague recollection it may not be good in the rain so I checked the weather report before heading north. Weather dot com said 20% chance of rain and which I took to mean a 20% chance of rain rather than rain 20% of the time.

The fishing on Levernetz was good, pike and bass. Late afternoon it clouded up and around six some light rain went through. Feral and I set up a tarp between trees to provide a shelter for our camp chairs. The rain stopped and we cooked some hot dogs over charcoal to get something warm in our bellies. Beer was good, and we had plenty. We jammed till about midnight and from this high point on a hill we could see other campfires die out as we delved deeper and deeper into our catalog of obscure folk and rock songs. Then the rain hit. We packed up the instruments and ran for the tent.

My pillows were wet and I had a small puddle in the middle of my sleeping bag. This must have been from the earlier rain. Not a good sign since it was now pouring. Feral fared slightly better. The top corner of his bag was damp but the main body was dry. A puddle had formed near the door so we had to climb on to the cots and remove our boots carefully. I managed to get comfortable because one half of one pillow was dry. I fell asleep but woke up an hour or two later because the beer pressure was rising. My left arm was soaked which explained why I was a bit cold. I went out to find a tree and when I returned I lifted the sagging bulges from inside the tent and was rewarded by the ploosh sound of water cascading over the tent walls.

I woke up at 7:00 and was not shy about getting up (and letting Feral sleep in). He heard me rustle and asked if it was time to get up. Yes. Feral had a tough night. Water dripped constantly on his head. The rain had stopped and we had planned to break camp early as we both had things planned for Labor day. So we packed up quick. If you are fast there is a nice cabin tent at campsite 2, Leverentz Lake that is just the thing in dry weather.