Temperatures have soared around Michigan this summer with small breaks for thunderstorms. When conditions look good, during or after a storm, I check with Feral to see if he is up for some trout fishing. I picked him up last Wednesday and headed up to the Pine River to fish a stretch we normally avoid. The stretch has a lot of boulders and gravel broken up here and there with remote sandy areas and deep holes. The wading is tough and it’s impossible to walk the shore back to the vehicle so you have to turn around and walk back downstream to get out. The stretch doesn’t get fished much by other fishermen.

We went up the morning after a storm hoping the stream would be carrying some mud or at least be stained. It wasn’t. Seemed like bad luck. Feral dropped the first keeper trout after de-hooking it, then another trout fell through a surprise hole in my net. It seemed like some sort of omen and we said as much. If we lost the next trout we would be questioning whether forces were working against us. I concluded long ago the world is not the linear picture show we take for granted. Feral has his own ideas based on early readings of Carlos Castaneda parsed with his advanced IQ. Another less interesting way to look at the loss of two fish is sloppy fishing. Feral should have had a death grip on the first trout and I should have known there was a hole in my net. Thankfully, we caught the next trout and didn’t have to second guess world order or sloppy fishing.

The day warmed up fast and we got out early. I had another mission in mind. We have an art contest coming up based on a white plastic chair we saw earlier on a different stretch of the Pine. I had google earthed the bend in the river with the chair and saw it would be possible to reach the area. My thought was maybe we could camp there sometime. When we found the chair my second thought was it would be dangerous to camp there. The drop to the river is straight down fifty feet. Maybe not such a good place for guys that like to tip a few beers in the evening. But what a view… 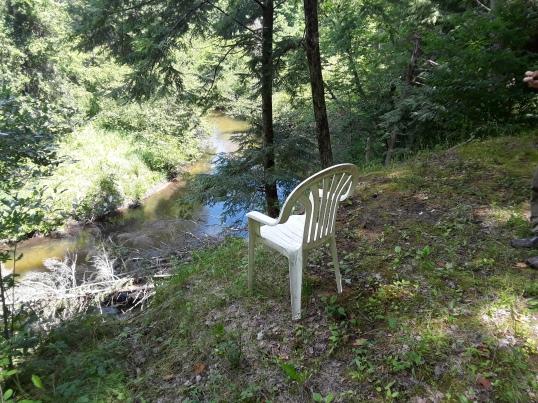