For about five years starting around 1968 Grand Rapids hosted one of the biggest parties in the country. Hundreds of home-made rafts and thousands of contestants ran a timed trip/race down a section of the Grand River on the north side of town.  Live rock bands at Riverside Park blasted the pretty much drunk and stoned out crowd. There was police presence but they were cool. They weren’t there to bust pot smokers, they were there to make sure the crowd was orderly. I know it may be hard to believe but in the late sixties and early seventies pot was not considered a big crime unless you happen to get in the crosshairs of a fanatic cop. We would never have guessed it would take fifty years for pot to be legalized in Michigan. Really, it was just a social thing, probably like drinking during prohibition. Back to the raft race.

Robbin Crawford, of local metal sculpture fame, worked as a welder for a local machine builder. I worked there a couple summers at the same shop. Robbin designed and built a couple rafts for the raft race and I was fortunate to be invited to participate. He somehow hooked up with Ficeli’s Party Store and Budweiser to build a custom raft, essentially a pontoon boat supporting a platform with Miss Budweiser, a local beauty. To propel the raft forward we had hinged boards bolted to the bottom of our shoes in a way that there was no resistance moving our foot forward, but when drawing back, like rowing, the hinged boards opened like an umbrella to scoop water. Didn’t work at all so we floated down the river in style. Robbin built a second raft whereby a couple were married on the river. Don’t recall their names, but that was a year or two after this race.

That’s Robbin sitting in front, then me standing, then standing at the back is Ken Phillips, my step-dad, a machinist working for the same machine shop. He managed to get me in the shop as a paid intern.  Here’s two more photos. If you google WLAV raft race you will find some photos that show the size and scope of these events. Sadly the event was cancelled after serious accidents on the river. I understand the city attorneys were worried about lawsuits.  Not sure how you weigh that against such a great time for so many people. 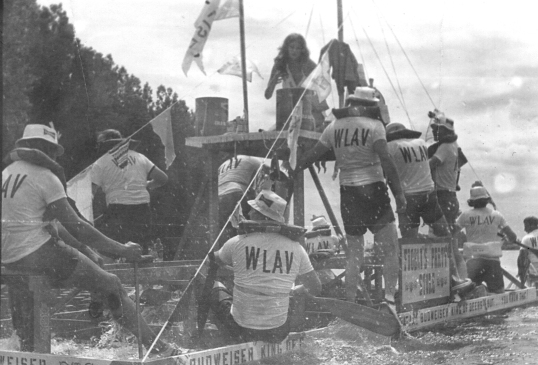