Archive for the tag “Tustin”

Opening Day on the Pine

Kayak angler on the Pine River

( click on photos to enlarge, browser back button to return) Feral and I fished a stretch of the Pine River on opening day. We parked at an old campsite off 6 mile road and walked downstream past a sharp bend figuring we would fish the bend then work our way upstream past the camp spot. We didn’t see any other anglers so I was surprised to hear Feral talking to someone almost immediately. He had taken the lead and was at the top of the bend. It was an angler in a kayak and he had a fish on. I didn’t see the fish so he may have released it. I took a photo (above) and soon his uncle, in another kayak showed up. They were friendly and talkative, not always the case when you meet other anglers, so I took their photos and mentioned this blog. 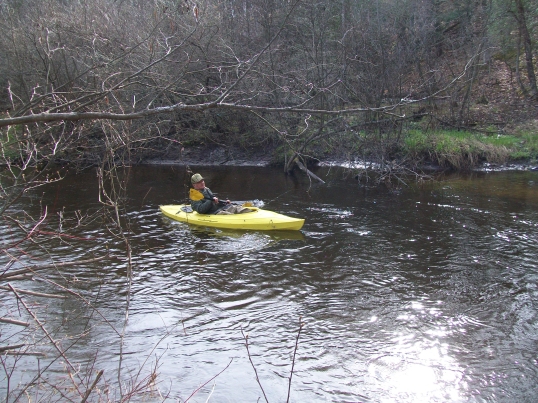 I caught an average size brown in a hole just upstream and Feral lost one the same size upstream a little further but fishing was tough. The stream was clear as tap water and we started pretty late in the morning. So we cut the trip short and had breakfast in Tustin, then ran over to our morel mushroom area to see if they we up. Unfortunately no, but it was just nice getting out and walking through the woods.