Archive for the tag “small streams” 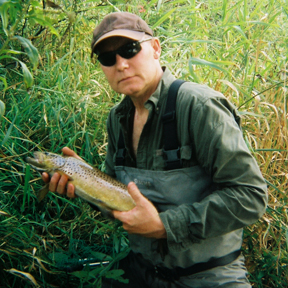 Some of the best spin fishing can be found on the small creeks eight to twelve feet wide that feed the streams made famous by the Hemingway’s of the world. They don’t get much traffic other than an occasional worm fisherman because casting is next to impossible. If you can cast and send lures horizontally into tiny pockets there is hope. Having been taught by an expert (Jake Lucas) that performed trick casting on Michigan Outdoors in the 1960’s helps in my case. Along with untold years of doing just that: casting into difficult cover.

When possible, fish feeder creeks during a summer rain, enough to boil the water or at least dapple it enough so trout don’t see you standing there. Feeder creeks come alive during a summer rain and can provide the best action you will see for the year. In the summer a sixteen inch fish is good, in the fall when the weather turns nasty and the closer approaches, big fish move out of the main stream and up the feeder creeks to find food. For years I travelled long distances to fish the famous and noted water during the summer and then caught my best fish of the year on a local feeder creek. In Michigan, you don’t have to drive far to find feeder creeks since major rivers crisscross the state.

Rain helps but you can also do well early morning or late evening. The trout are usually aggressive for any lures because the competition for food is great, and the trout are not as suspicious of lures as they are on the main rivers. They will stray away from their cover into the main stream channel for a sizable or flashy (think spinners) meal. While I mainly find brown trout on feeder creeks, there is a good chance of catching brook trout the further you go upstream. Catching a brook trout is like stepping back in time, back before the brown trout plantings and the later steelhead and salmon stocking. I don’t keep brook trout. I look them over, enjoy their beauty, and turn them back. Just seeing one is enough.