Archive for the tag “fishfinder repair”

I know I keep veering away from trout fishing and promise to get back to it soon – but this may be important to a fisherman somewhere. I have an older model Humminbird fishfinder, a Wide Eye, from the eighties. The wires to the transducer were sheared (or pulled off) right at the transducer puck. I did some research online and found a replacement for $77.16 at Amazon, but, based on an email to Humminbird Service, I couldn’t be sure the replacement transducer works with my older model. (Service said my unit is so old there are no replacement parts and I should buy a new fishfinder – uuhhh… thanks for the advice?)

I trolled the web to see if there was a way to fix it. The word on the web is: buy a new one because you can’t repair them. I could see their point, in my case the wires I needed to reconnect are encased in the plastic compound of the puck, sort of like Hans Solo encased in Carbonite, but less to work with.

I decided to do surgery on the puck. (What did I have to lose?) The main issue was getting to the wires inside. I took a 1/8th  inch drill bit and made small holes all the way around the spot where the wires exit. I drilled just deep enough to break though the molded plastic seal. Then I chipped away the plastic until I could see the two wires, one black and one red (matching the wires encased in the cable). The wires are tiny – so extreme care has to be taken to work them free of the plastic seal. Once they were free I was able to strip the coating off the two wires using an exacto knife and a lot of patience.

Then I did the same thing with the cable end – stripped and exposed enough of the wires so I could hold and solder them to the wires in the puck. I used a pencil type soldering iron with a fine point. Once the wires were soldered I filled in the hole and soldered joints with two part epoxy. I gobbed on enough so that it covers the cable where it exits the puck. Hopefully it’s as strong as carbonite so the wires don’t pull out again. 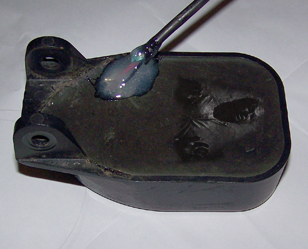 The Test: I took the boat out on a local lake and it seems to be working better than ever. It zeroed right in on the bottom. If you are on a budget – don’t trash the transducer. Dig out and solder together the broken off wires and gob up the hole and wires with epoxy. Save yourself eighty plus dollars with very little effort.