I met Natch and Feral up at Pickerel lake, Pigeon River State Game Area. We had our vintage Apache and JC Higgins campers so camp was comfortable. Natch cut a load of beech firewood which sustained us for four nights. It was chilly but too early for fall colors. When the sun came out it felt ten degrees warmer.

Fishing was good the first two days. The the rivers were dirty and high. Natch caught a 22 inch brown trout on the Sturgeon and I pulled a couple out of the Pigeon, 20 and 21.5 inches. I fished a stretch on the upper Sturgeon with Feral. He had a huge brown making passes and suggested I tossed my lure from the other side of the river. I hooked him for a moment but that’s the last we saw of him. We did catch some small keepers including on the Pigeon so it seems like the Pigeon is making a comeback after the disastrous dam overflow/silt problem a few years back. 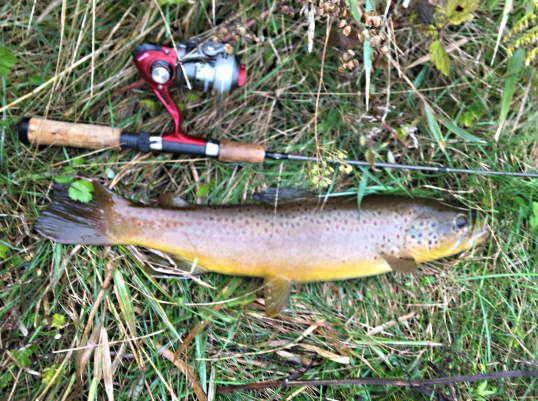 Natch’s 22 incher from the Sturgeon

We had an interesting jam the first night, Feral on mandolin, Natch on bongos, and me on electric, then acoustic guitar. Think Jethro Tull/Locomotive Breath and Pink Floyd/Welcome to the Machine. Not our normal folly. I ran out of words quickly on the Floyd song but when I looked over at Feral and Natch they were focused on jamming so I kept playing. There were no witnesses so I can safely say we sounded good.

I fished a stretch of the lower Pigeon with Natch on the last day. I had seen a monster brown there earlier and when we approached the spot Natch insisted I make the same cast. I tossed a variety of lures while he waited patiently. It was getting embarrassing by the time I finally gave up and told him to go for it. That giant fish was probably deep into the undercut bank and never saw a lure. Maybe he heard us in spite of our efforts to be quiet. So.. Maybe next year I will see that fish again. It may have pushed 30 inches.