Casting Practice on the Little South

Denny, a trout camp irregular, sent Feral and I an invite to camp this last weekend with the idea the trout would be biting with the predicted rain storms. I didn’t want to pass on a chance to camp, and maybe play some late night guitar, but there was nothing about the weather report that suggested we might stay dry. So a fun night of beer and guitar was possible, but unlikely. I said yes, we set up camp in a drizzle, and hit the streams.

I fished a stretch with Denny on the Little South. It was the first time we shared a stream together in years. I hung back mostly and noticed right off he had the Lucas underhand flip cast down solid. The other thing I noticed was his set-up, a Shakespeare 1810 reel and a spinning rod with the reel seat at the base of the rod. Turns out he modified a standard spinning rod in order to get what he wanted. Spinning rods with long cork handles and sliding rings are getting hard to find, and you pay a lot for them. Denny made do and it worked because he was slinging a bargain bin minnow bait (60 cents!) into tight cover. I have to start looking harder at bargain bins because his lure was convincing.

The stream was up a little from summer levels but clear as glass, which is good and bad. The fish can see the lures, and the fish can see you. I hung back mostly watching Denny work the cover and talk about everything. I would never call Denny a motor-mouth because sometimes a motor fails. (ha!) I was entertained. He caught a small keeper and lost one that might have been pretty good. Like a pro he rested fish for a couple minutes if he saw one make a pass at his lure. Basically letting the fish get back to its feeding spot, then making the same cast. Often good for fish.

After a night of rain we went back to the Little South, but this time we cut off a couple stretches, with the idea I would meet up with Denny in 2 hours so we could head back and break camp before the 11:00 AM check-out. The morning fish was productive. I caught 3 decent browns and missed a very nice one, probably 18 inches. Denny caught a keeper and saw a good one also. I caught the fish in the photo below which is larger that you might think. That’s a #11, 3-hook Rapala. The fish was probably 15 inches. 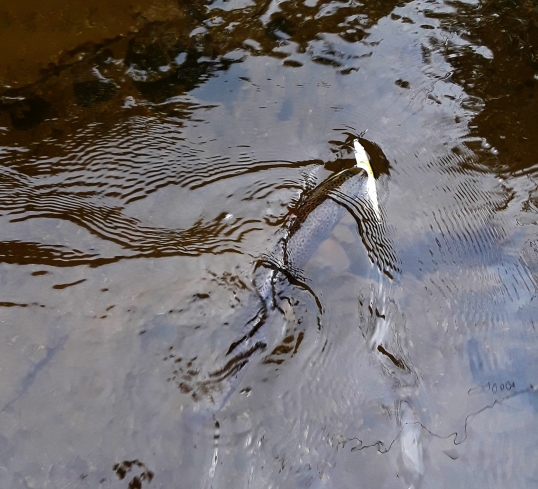 So Denny and I both have stuff drying out in our garages this morning. And a fun trip behind us. Feral didn’t camp but did show up at dusk, with Jake, his son, to jam guitars but the rain picked up as they pulled in. They hung out for a bit, but no sense standing around getting soaked. Jake has a commission from the city of Alpena for a park sculpture which requires some serious metal working tools and skill. Feral has a machine shop and the two of them are fabricating some pieces for the sculpture on weekends. Denny just returned from Nazareth, PA where he built a guitar in a small class run by Martin Guitar employees. He needs to put on a finish coat before he takes it camping. My thought, some dry weekend let’s try again.

One thought on “Casting Practice on the Little South”