October may be the best time to camp in Michigan. The fall colors are spectacular. Weather can be good or bad but if you pick your weekend it can be dry, seasonal jacket weather which is great for fishing, hunting, trail walking, kayaking, whatever calls.

Feral and I are trout fishing addicts and usually call it quits at the end of the regular fishing season, the last Saturday in September. Upon closer review of the rules and regulations I noticed one of our favorite streams, the Pigeon, has a section that stays open all year for rainbow trout. We decided to give try. I met Feral up at the Pigeon River State Forest Campground on Sturgeon Valley Road last weekend. The stream is closed there, but we knew some spots on the open water further downstream that hold good trout, down toward Tin Bridge.

It helps to have a 4WD vehicle to get back in there. I upgraded my trout car this year to a 2000 Lexus RX300, a short wheelbase, good clearance vehicle with 4WD or AWD, there is some confusion about which, but we had no problem getting to Tin Bridge, and also explored some other old two-tracks that were even more remote and less drivable. A Lexus trout car? Don’t laugh.

We hiked downstream from Tin Bridge and I must say the walk in is brutal. We followed the stream but there is no trail to speak of, so a lot of branch busting and detours away from the stream. We found some giant mushroom balls on the way. Feral said they are edible if you catch them at the right time, but these were past due. 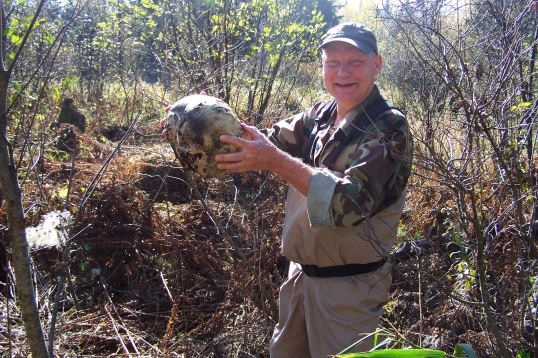 We arrived at a nice sweeping bend with a deep undercut bank. No luck there but before long we were catching (and releasing) some decent brown trout, nothing huge, but up to about 16 or 17 inches. We didn’t catch a rainbow trout. The browns were all very dark colored, possibly due to the black silt problem from the dam spillage a few years ago. 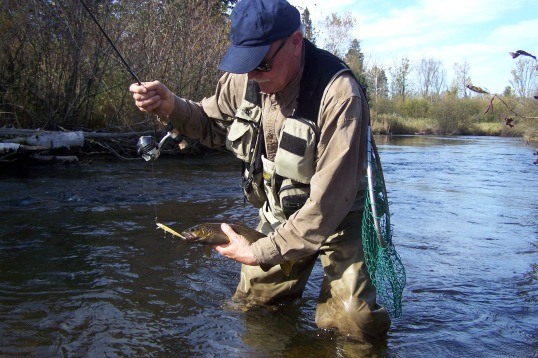 On the second day we hit a remote spot accessible off of the Shingle Mill Pathway. We ran into a group of young backpackers with small dogs. The dogs had saddle bags! I guess they had to carry their weight, no slackers in that group. We followed the trail downstream and cut in east to intersect the river. There’s a nice mix of gravel and sandy areas including some deep bends. On one of those Feral was up ahead and had a huge trout, possibly a steelhead, follow his lure back, but the fish didn’t strike. 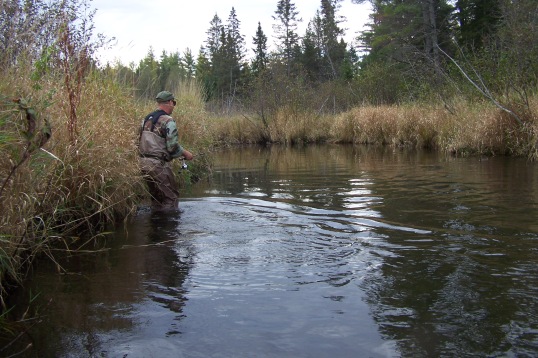 Scene of the crime

He motioned for me to cast up above him with my lure, thinking the fish might spot him if he moved. I made the long cast and sure enough, it slammed my lure, rolled on the surface, and broke off. (I had just put new 10lb test line.) Lost my favorite lure, but mainly felt bad for the fish. We both guessed it was a two footer, a brown. Hopefully he was able to dislodge the lure. 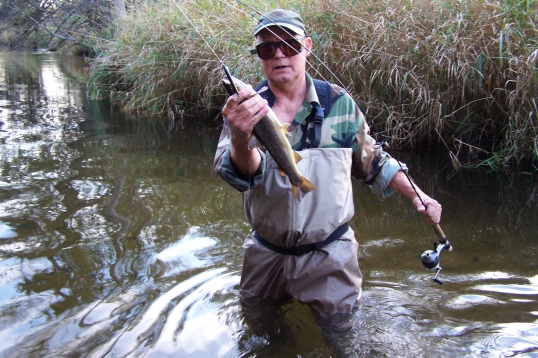 We caught more trout as we moved up the stream, or I should say Feral did. I held back, overthinking the loss of the big one. Feral was sticking his lure into pretty tight spots and taking fish. Again no rainbows, but decent browns which he released since they were not in season.

Back at camp we had campfires both nights. We usually scavenge for wood but I found a good deal on split logs just outside of Vanderbilt. Five buck for a nice load that lasted hours. We played guitar and mandolin the first night, running though a lot of classic Dylan, John Prine, as well as some newer songs that are good jams. The second night we talked for hours just staying up enjoying the fire. October Camp is on the calendar for next year. The woods were almost hypnotic with bright colors. Fishing was good but a rainbow trout for dinner would have been nice.