I was sitting on the edge of my bed strumming an unplugged electric guitar when my deceased Uncle Boyce walked in. He was wearing waders. I debated whether I should point out he had passed away and decided not to say anything. Instead I got off the bed and went to him and he was very tall which made me realize I must be size of a child since he was not a tall man. I asked, “how was the fishing” and he said, “not good.” As I looked at his face it started to vanish. I woke up right away and lay there wondering how Boyce could just pop into a dream from nowhere.

Boyce was my mother’s older brother. Most of my memories of him are from early childhood when our family moved in with my grandparents to get away from my father. What I most remember about Boyce is his warmth as a person. He was always happy to see us and when he was around everything was more special. He was a high school teacher which must have been the perfect job for him – surrounded by young minds that would appreciate his warmth and energy.

Boyce and grandpa were fishing buddies and would camp together. More so than I probably realized. I have told this story a couple times but not on the website. Feral’s boy, Jake, named after grandpa, and I fished a stretch together on the Sturgeon River up by Vanderbilt and after we got back to the car we found an older guy just hanging out there. He was in waders so we got to talking about fishing and he mentioned he was a teacher in Montague. Boyce, who had passed away a few years before that, taught in Whitehall, which is the neighboring town, so I asked if he knew Boyce.

The question almost startled him. He took a deep breath and said, “Boyce was my best friend.” I told him Boyce was my uncle and he started reminiscing, telling us about how he and Boyce would camp with Jake (Grandpa) and after a few beers Jake would pull out an old bait casting rod and tie a rubber ball to the line. Jake would cast/pitch the ball to Boyce and his tipsy buddies who would be at the plate with a bat. If you can imagine this.. Jake, who did trick casting demonstrations on Michigan Outdoors TV show in the 60’s, would pitch the ball using an underhand flip cast, his specialty, and would control the ball as it moved toward the batter. He had a variety of casts including a diabolical curve ball, a fast ball that would slow way down as it reached the plate, you get the idea. It was hard to hit a Jake Lucas pitch. When you did connect Jake would stop the fly ball by thumbing the level wind spool, reel in the ball, then cast and hit you as you ran toward first base. So if he didn’t strike you out, he tagged you on the way to first.

So that was an eye-opener for me, not the “casting rod” baseball, I knew about that because Grandpa played that with us kids in the backyard. The eye-opener was Boyce getting tipsy on beer with his buddies. It had never occurred to me that my respectable uncle had a fun adult life with regular buddies. Until then I always had the same vision of him, this kind and happy man dedicated to his family. 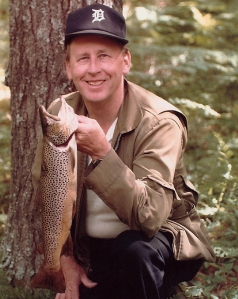 Somehow I lost his name, but I’ll thank whomever I met up by the Sturgeon for readjusting my point of view because now I can’t help but smile when I think of Boyce… hanging out with some fishing buddies and knocking down a couple cold beers. Doesn’t hurt that Grandpa is in the picture. Those two would be fun at any trout camp.

Boyce, no more dream visits though, please, that was too spooky.