These Fish were not Photoshopped

This nice brace of trout was caught by Feral some time before the turn of the century.  If I recall the story correctly he passed a couple worm fishermen walking the bank upstream, caught the trout in ten minutes, and walked back past them heading downstream. The worm fishermen couldn’t believe their eyes.  A proud moment.  They were kind enough to take this photo and I have been trying to figure out ever since where exactly on the Pine River he caught them.  If you look closely something doesn’t seem right.  Feral assures me the trout have not been photoshopped, but concedes everything else might have been. 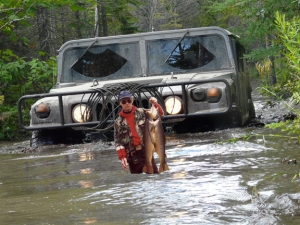 2 thoughts on “These Fish were not Photoshopped”