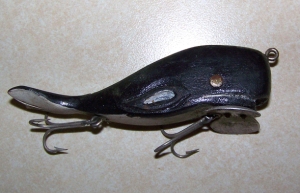 Trout have a reputation for being finicky and I can probably thank fly fishermen for that. Most published accounts focus on finding the one pattern that works for a particular time and place and that makes me smile since I have pulled junk out of my congested lure tote that resembles nothing a trout has ever seen and proceeded to catch trout.  One time on the lower Baldwin, in a good rain, I lost a favorite lure and had to try something untested. By chance I had a big-lipped deep diving crankbait with me and since the water was high and rising, I figured what the heck. My second cast brought in a medium size brown around 14 or 15 inches. The Big “O” type lure was mostly green and had a fish type pattern that was supposed to resemble a bluegill. Not much chance the trout I caught had ever seen a bluegill. I caught one or two more keepers on the lure before finally calling it a day.

I haven’t caught a trout yet on the #3 Sperm Whale pictured above but I don’t count it out. My reading is it’s a night lure and I know just the pool to try it on. It’s designed to wobble like a jitterbug and who knows what kind of leviathan it might call up from the deep. I’m half afraid to use it since it may be the only one like it in existence and I don’t have to tell you what the antique lure market is like.

One year Natch, our “wired” fishing buddy, hit the bargain bin at Wal-Mart on the way up to trout camp. He picked up some dollar bass lures of various strange patterns. He caught trout and what really amazes me is that for several years running he took “big fish” honors in our annual contest. I can’t say it was the dollar bass lures, we keep some secrets, but I know he experiments.

I recall another year when we trout camp regulars were disgusted by the rising price of our “standard trout lures” and experimented with new lures by Japanese companies. The Japanese get creative and have made a huge impact on the professional BASS tour. Some lures are reminiscent of their monster movies although this one reminds me of the Nautilus from 2000 Leagues under the Sea.

As you can see the lure has a perch pattern and I’m pretty sure the stream trout I fish for have never seen a perch.  Or the Nautilus. Feral and I ran into this lure by accident. He had invited a buddy from Alpena to go fishing and we stopped so the guy could buy a couple lures. He wasn’t a trout fisherman and chose this to our dismay. Once on the stream we watched him pull in trout after trout while we shook our heads and tossed old standards without luck. So there’s a good clue. Trout aren’t afraid to change their diet. Generally speaking – they are after an easy meal.